135 Geographic Squadron have had a busy time recently and some of that has been in the art of recruiting. We are always keen to see more people join the Squadron and as such we’ve seen Squadron members running 5k’s at local parkruns, drive a 15 ton truck into an exhibition centre, hold a barbeque at the Surrey Research Park (a hub for Geospatial businesses) and join a geospatial humanitarian and disaster relief event (www.missingmaps.org). 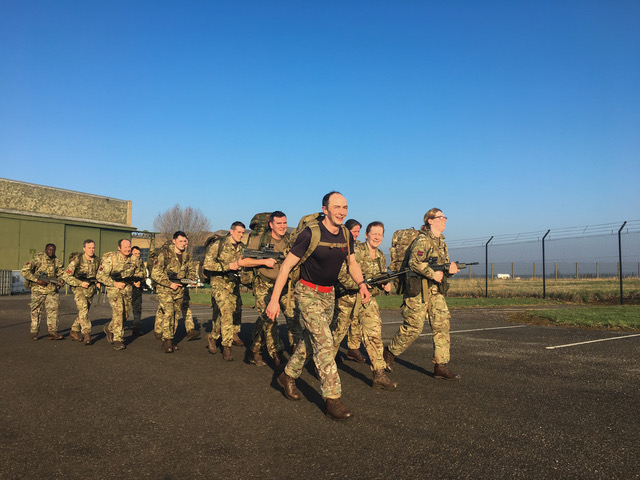 We have seen Major Mark Sleeman take over as Officer Commanding as well as WO2 Jerome Batterbee take over as Squadron Sergeant Major.

In October we saw the Squadron running through buildings and throwing grenades all in the name of Urban Operations training. This is a fantastic opportunity to exercise our basic soldiering skills and everyone came away exhausted and elated from an exciting weekend.

Our Remembrance Day parade went very well and it was wonderful to welcome the Master of the Company to the event. The Endeavour Award is normally presented at this time of year and Digby presented the new plate, that the Company had donated to the Squadron, to LCpl Nortje. The Endeavour Dinner is to be held on 11th May. 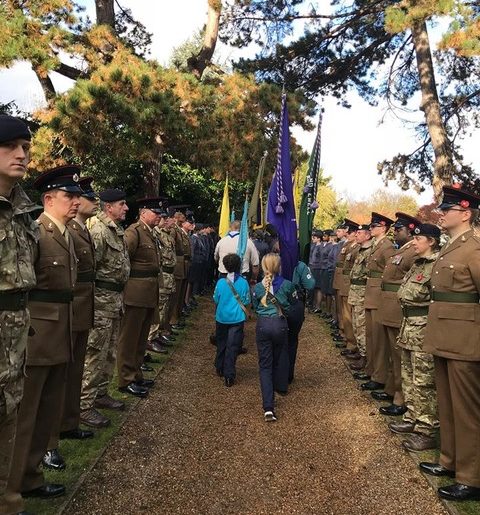 The last Tuesday’s training of the year is always reserved for the Sergeant Major’s Christmas Quiz and this year the hotly contested event was made all the better by a full complement of pizzas that had been paid for by the Company’s very generous Christmas gift. We thank you from our hearts and our bellies.

In January we had our first Geo technical exercise that tested our ability to provide Bulk Reproduction mapping to what could be 2-3000 personnel in a real life scenario. This capability is unique to the Squadron and as such we often have to familiarise some of our regular counterparts on the equipment. This will then lead into a Regimental technical exercise in March to further build our skills. 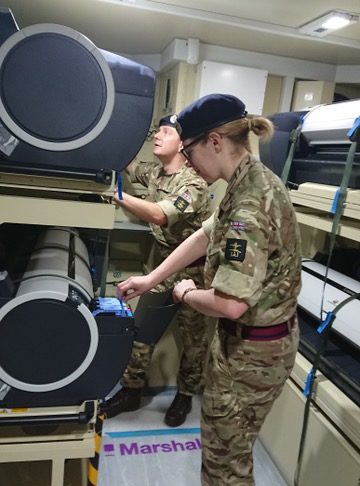 Further on the horizon the Squadron will embark in May on the first Army mountaineering expedition to Uganda to trial some new tourist routes for them. This will be a fantastic opportunity for those involved to go above 5,000 metres and to test themselves in the harsh environment. In the summer members of the Squadron will deploy to South Sudan in support of the UN Mission. They will be involved in various engineering tasks and infrastructure projects.

What’s new?
Since last going to press ECHO has, as always, been keeping busy. A maintenance period was completed in December ensuring that ECHO is fit to continue her upcoming tasking including both survey and defence engagement operations. ECHO and her Ship’s Company also spent the Christmas period in the Black Sea.

The Black Sea
At the start of December HMS ECHO received notice that she was to deploy into the Black Sea on Operation ROCKHARD, to conduct Defence Engagement with the UK’s allies and friends in the region and demonstrate Her Majesty’s Government’s commitment to the region. With very little notice, there was just time for a quick stop at Crete to collect stores and personnel, most pressingly winter woollens for the sub-zero temperatures that would be experienced in the Black Sea. On 17 Dec the Ship transited the Turkish Straits, first the Dardanelles and then the Bosporus, before making the most of her three weeks in the region, which is the period permitted in the Black Sea for a naval vessel under the terms of the internationally agreed Montreux Convention.
Whilst operating in the Black Sea Ship’s Company experienced port visits in a variety of places.

A Visit From the Secretary of State
Ukraine
Our first stop was Odessa, Ukraine, where there was a very warm welcome from the Ukrainian Navy and the locals alike. The UK has been offering her support to the Ukrainian armed forces through Operation ORBITAL for some time, and the arrival of a Royal Navy ship was extremely well received. The Ship’s Company was able to enjoy the local preparations for Christmas and soak up the atmosphere of a vibrant city, as well as making preparations for a VVIP visit on 21 December. The Secretary of State for Defence, the Right Honourable Gavin Williamson CBE MP, flew out to Ukraine to visit HMS ECHO and meet his opposite number.

He started the day by addressing the Ship’s Company and wished everyone a Merry Christmas, recognising the valuable contribution made by members of the Armed Forces who are deployed over the festive season. He also presented an award from the Royal Humane Society to Ship’s Company in recognition of a particularly challenging rescue of over 200 migrants from sinking boats in June 2017, when the ship had been deployed on Operation LITTEN.

The Secretary of State then enjoyed breakfast on board with Her Majesty’s Ambassador to Ukraine, Ms Judith Gough CMG, and the Commanding Officer of HMS ECHO, Commander Matthew Warren Royal Navy, before setting off to visit the naval base and the Ukrainian flagship, HETMAN SAHAYDACHNIY. Here the UK party met the Ukrainian Defence Minister, Dr Stepan Poltorak, and the Head of the Ukrainian Navy, Admiral Igor Voronchenko, and the 2 ministers engaged in valuable bilateral talks.

To return to HMS ECHO, the group took an invigorating trip in the patrol boat GURZA-M, the first of 20 such vessels joining the Ukrainian fleet. The Secretary of State used the opportunity to tour the ship and speak to the sailors individually about their experience on board and the current deployment, making an especial effort to thank those who had contributed to hosting his own visit and that of the Ukrainian dignitaries. Before leaving for the airport there was still time for a glass of mulled wine and a mince pie with personnel from the ship and Operation ORBITAL and to express his gratitude once again to the service personnel deployed over Christmas.

Christmas On Board
Romania
The next port that ECHO visited was Constanța, the largest port in the Black Sea and the oldest city in Romania. Here 14 members of Ship’s Company volunteered to spread some festive cheer at a disabled children’s home. On arrival they were serenaded by a Romanian Christmas song and shared in a traditional meal of bread and onion, before giving out gifts round the Christmas tree. Closing with a rendition of “We Wish you a Merry Christmas”, HMS ECHO’s sailors and Marines reluctantly departed. “It was very rewarding to deliver Christmas cheer to these children spending their Christmas in a children’s home,” said Leading Medical Assistant Lauren Armour, one of the volunteers from ECHO.

A Christmas Day Captain
After returning to the ship, there followed a day of celebrations to make the most of spending Christmas apart from families and loved ones. For the youngest sailor on board, Engineering Technician Matthew Sutch, this included the traditional opportunity to become captain for the day. After his breakfast in the Commanding Officer’s cabin, there was a handover ceremony on the quarterdeck when he was promoted to Commander Sutch. The new Commanding Officer enjoyed the chance to preside over Santa handing out Christmas boxes and providing updates to Ship’s Company over main broadcast, but in an example of sound discretion he forewent the temptation to conduct rounds on the First Lieutenant’s cabin.

Wreath Laying at Commonwealth War Graves, Georgia
Before long HMS ECHO was alongside again, this time in Batumi, Georgia. The history of Georgia is a long and proud one, with connections to many other countries. One episode of the nation’s past was a period from 1918 to 1920 when she was under British protection and UK servicemen were deployed there to defend the Batumi-Tiflis-Baku railway line. A memorial now stands to those who died while serving here, maintained by the Commonwealth War Graves Commission, and over half of the Ship’s Company took part in a memorial service there on 29 December.
AB Ryan Prince was the wreath bearer and ceremonial piper for the commemoration. He said of the event: “It is easy to forget these people as they are so far away from home and yet died in the pursuit of peace.” The history of the site was explained before the list of fallen was read, a commemorative silence kept, and a wreath laid by Commander Warren, ECHO’s Commanding Officer. Prayers were then led by our Chaplain, Reverend Phil Amey.

Manoeuvres with the Georgian Coast Guard
Later that day a number of Ship’s Company and embassy personnel were invited by the Georgian Coastguard to a traditional Georgian banquet called a “supra”. The supra is almost a ritual for the Georgians who take hospitality very seriously and it was not long before the table was groaning under a wide variety of dishes and local wine, little known in the West but direct descendants of what claims to be the oldest tradition of winemaking in the world, going back over eight thousand years.
The host, Captain 1st Rank Temur Kvantailani appointed his deputy, Captain 1st Rank Ramaz Papidze as the Tamada, or toastmaster, who led a series of toasts centred on Naval life, each of them followed by the Georgian cry of “gaumarjos!” Georgian hospitality certainly lived up to its reputation and relations between Georgia and the UK were reinforced over glasses, bowls, and even horns of the local wine.
HMS ECHO left Georgia on New Year’s Eve and passed into 2019 as she sailed towards the Bosporus, a watch handover, and her next tasking, with all on board having experienced a Christmas like no other in the Black Sea.

What’s Next for ECHO?
2019 already promises to be a busy and productive year for ECHO who stopped in Turkey for her first port visit of the year. ECHO is due to get back into her core survey role and is expecting to spend some time over the coming months in the Eastern Mediterranean.

Seven members of the Sqn are currently mobilised in support of Op SHADER (the UK contribution to the ongoing coalition intervention against so-called Islamic State). Two Sqn members were deployed over Christmas (one overseas). The five remaining personnel mobilised earlier this month to meet a short-term UK based requirement. One other Sqn member volunteered to work over the festive season during his own civilian annual leave and was gainfully employed on Christmas Day.

As usual the Sqn’s primary focus is the provision of intelligence analysis in support of operations and the augmentation of Regular RAF teams at RAF Wyton. Our structure remains centred around four teams, each focused on different intelligence tasks involving the analysis of imagery with one team supporting RAF Wyton over two weekends per month following a successful trial in 2018.

Eleven members of the Sqn are currently enrolled on the Operational Air Intelligence Course (Reserves) (OPAIC (R)). Successful completion enables participants to work as generalist Intelligence Analysts prior to completion of imagery specific training. Five Sqn members successfully graduated from this course in Nov 18, one of whom was awarded the “Top Student Award” for her outstanding performance throughout this demanding course which involves compulsory learning weekends and a significant amount of self-directed learning during individual spare time.

Sqn members have completed the Defence Intelligence Analysis Module at RAF Wyton, the Intermediate Officer Training (IOD) course at the Joint Services Command and Staff College and the Equality & Diversity Advisers Course during this reporting period.

We have 10 personnel undergoing Basic Recruit Training at RAF Halton.

Sqn members have been directly involved in the following activities:

Tony and Polly Joyce attended the Intelligence Reserves Wing Reception, held at the International Bomber Command Centre near Lincoln on 13 Oct 18. The event showcased the work of the Wing’s three Intelligence Sqns and provided us with an opportunity to thank our civilian employers and affiliates for their important support. Tony and Polly also visited the Air Combat Power Visit at RAF Coningsby on the 14 Oct 18 – an opportunity to receive briefings on all the RAF’s capabilities and view our current aircraft.