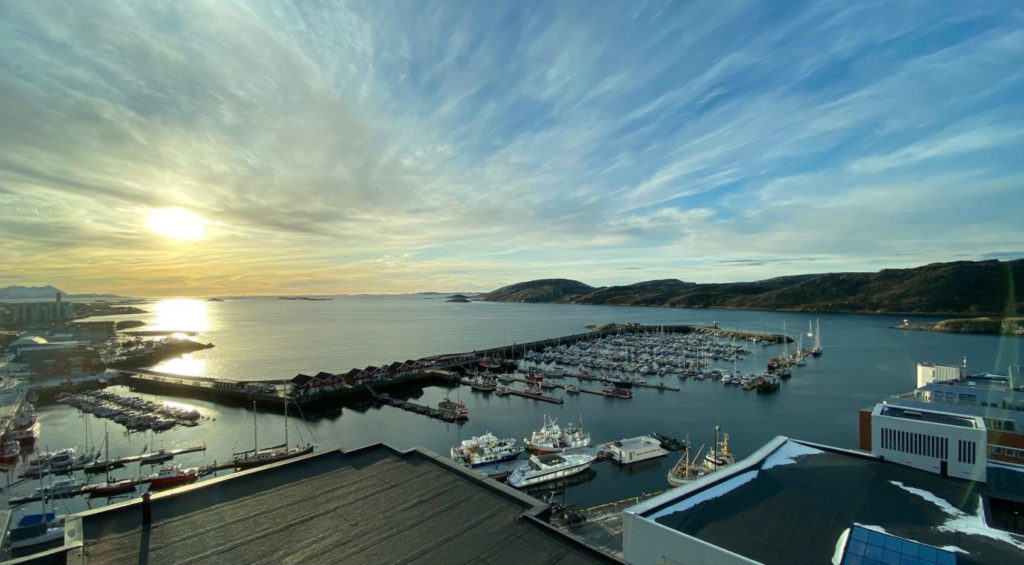 What’s new?
You will not be surprised to hear that HMS ECHO has been kept busy. So busy in fact that it is over six months since the last edition. This time has seen a return to UK waters for the first time in two years, a period of operational sea training, our first maintenance period up in Middlesbrough and a trip into arctic waters for Exercise Cold Response. 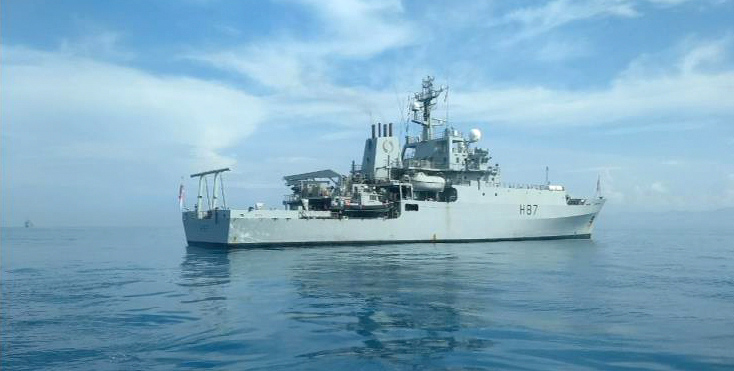 Behind every good sailor is their family…
ECHO sailed from Lisbon for the final part of the journey home. This relatively short transit provided an opportunity to host some lucky family members, allowing them to see first hand how we live at sea. From weapons practice and learning how the Ship’s Company deals with fires and floods to enduring a slightly lumpy sea state, this really was the full experience.

The captain, Cdr Matthew Warren, said of the event “I’m delighted to have had this opportunity to thank members of the extended ECHO family for their enduring support”. 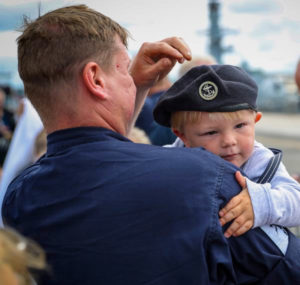 ECHO arrived back in her home port of HMNB Devonport on 15 August 2019 to a jetty full of friends and family. With the gangway quickly in place, the crew were reunited with loved ones. For many of the Ship’s Company this was their first experience of a homecoming, seeing families waving madly and an occasion that they will always remember. The next day the ship held a families day. Unfortunately the weather prevented us from sailing, but families were invited on board for a day of fun alongside. This allowed those that were not able to sail from Lisbon to explore the ship and meet other members of our team. With the ship having been deployed throughout the last two years, this was the first opportunity for many to invite loved ones on board. 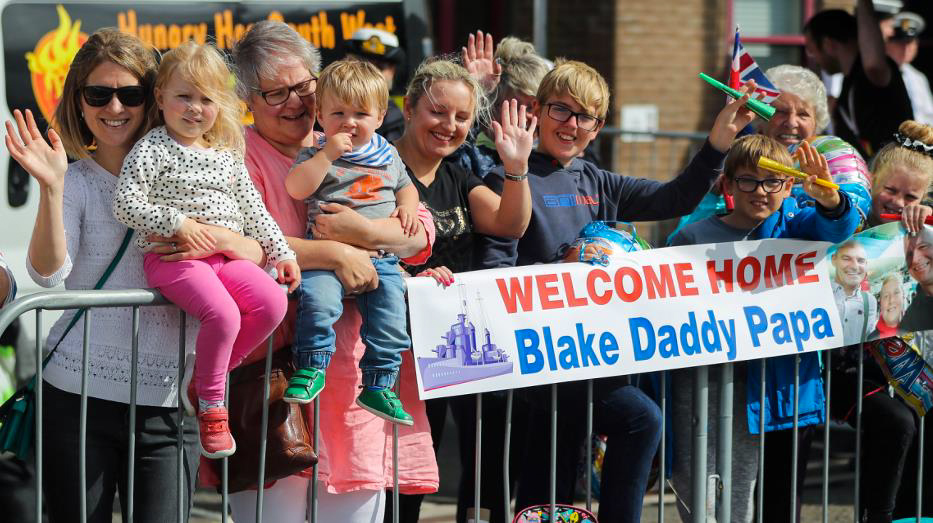 A day not training is a day wasted…
Every ship when they regenerate (or get themselves ready for the next deployment) will conduct a period of Operational Sea Training (OST). This tests the Ship’s Company’s ability to deal with any situation that could occur whilst on operations. These serials include: damage control and firefighting, humanitarian disaster relief and practising actions for if the ship comes under attack. For ECHO this training lasted five weeks and with a lot of hard work, we passed with flying colours. Arguably one of the most important areas of training for the ship is damage control. It is vital that the Ship’s Company are equipped with the knowledge to quickly deal with an incident whilst at sea where there is no one else to rely on. Training started off with the basics of extinguishing a simple fire and dealing with a small flood, quickly ramping up to complex scenarios with multiple incidents. If you ask any sailor for the most iconic part of OST you are guaranteed to get the same answer… the Thursday War. This is, as the name suggests, an outbreak of hostilities that occurs every Thursday off the South West coast. Combining with other ships and aircraft, it aims to put teams under pressure to achieve tasks in an environment where priorities change quickly and the internal battle (damage control) meets the external battle (fighting the war). For a lot of the crew it was the first time they had conducted training of this nature for an extended period of time. Many of them surprised themselves with how much they learned in the process, as well as the fact they also managed to have some fun along the way. 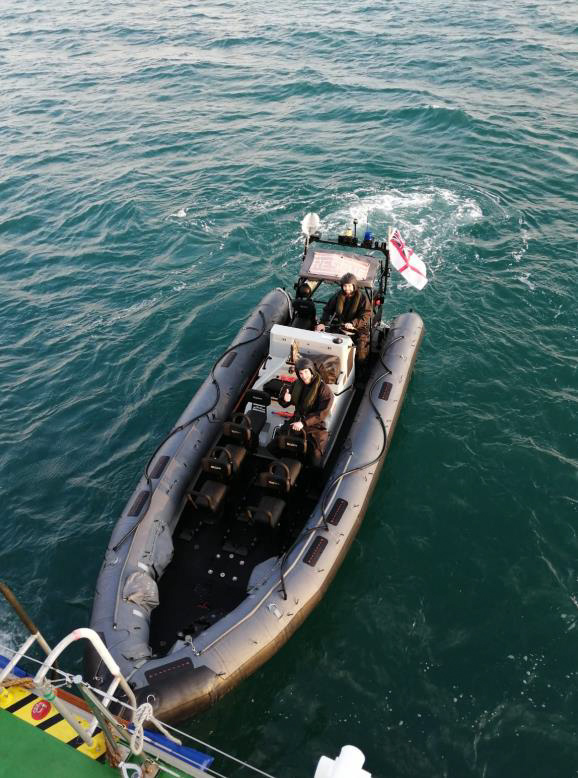 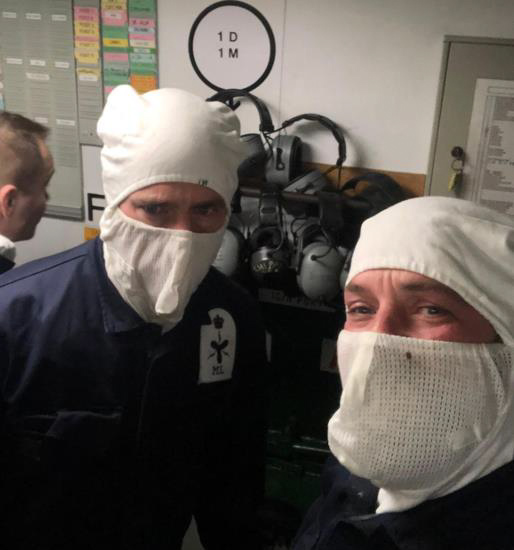 Another essential part of training is the Non-Combatant Evacuation Operation. As a versatile ship with excellent endurance, an important capability ECHO can provide is the ability to remove people from deteriorating situations overseas and transport them to safety. This requires a lot of careful planning by the ship in which every department has a role to play; from maintaining safety and security, through to looking after basic needs, providing medical care and keeping the ship underway. Exercising this serial was one of the most rewarding aspects of training – and with Actors Guild members enthusiastically playing the role of evacuated persons, occasionally it was also the most entertaining as FOST staff battled to keep everyone ‘on-script’.

Exercise Cold Response
Every year Royal Navy and Royal Marines personnel participate in Exercise Cold Response. This year saw ECHO sent out into the cold with ALBION and SUTHERLAND firstly in Stavanger, Norway before sailing with other nations to form part of the task force. Over the next two weeks this task force would conduct a variety of exercises manoeuvres and procedures in the extreme environment of the Arctic Circle. On sailing from Bodo the ship headed towards the Lofoten Islands where it conducted some basic Officer of the Watch manoeuvres and task group integration with Dutch and Norwegian personnel – a valuable opportunity for a ship more used to operating alone. Another capability that ECHO has but is rarely able to exercise is becoming warfare countermeasure (MCM) tasking authority platform which essentially involves providing command and control facilities for an embarked staff as well as logistical support (fuel, water, supplies and engineering facilities) to a group of MCM ships, which are generally much smaller than ECHO with correspondingly less capacity to sustain long periods at sea without support. Some of this was practiced with both Dutch and Norwegian MCMs. Whilst at sea some of the Ship’s Company were lucky enough to watch a pod of killer whales swimming alongside the ship as well as witness one of the natural wonders of the world… the Northern Lights.

And in true ECHO fashion there was time for fun with most of the Ship’s Company attending a local ice hockey match – our thanks to the Royal Navy and Royal Marines Welfare (RNRMW) charity for supporting this event which was enjoyed by our many new ‘Stavanger Oilers’ fans.

COVID-19
Of course the majority of this activity pre-dates the start of the COVID-19 pandemic. Like everyone else we have had to adapt quickly to the current circumstances but it is essential for the Navy to ensure that we have the ships and capabilities to meet the next event in an uncertain world. We’re maintaining our operations through careful risk assessment and mitigation that includes self-isolation of personnel prior to crew changes and rigorous hygiene measures. We’re grateful for the support we continue to receive and assure you that we’re doing everything we can to keep ourselves – and everyone else – as safe as we possibly can.

So… What’s next?
ECHO is now undertaking UK based survey and maritime security tasking before a short but intensive maintenance period the will ensure we’re at peak readiness to operate anywhere we might be required. Until the next edition – we wish all our families and affiliates good health and a safe and expeditious journey through these unsettling times. 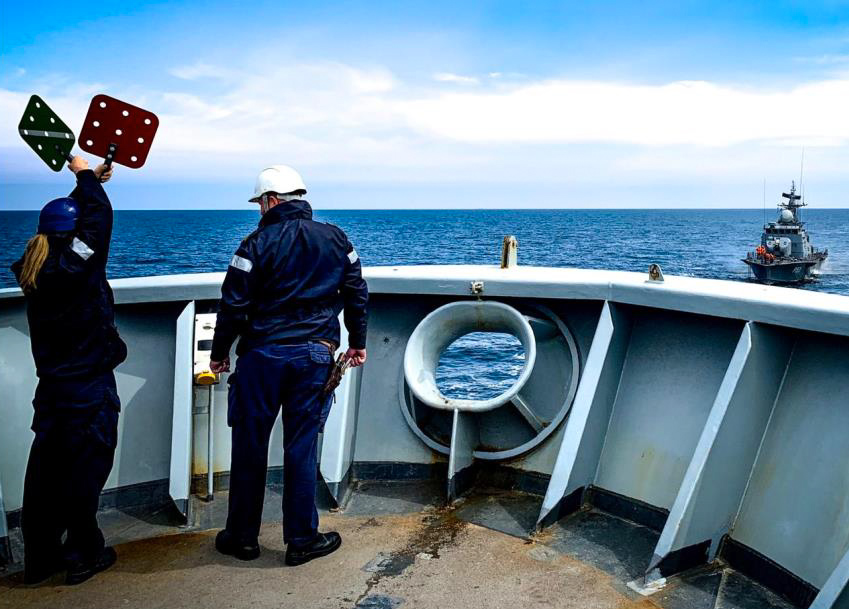 Annual Camp
In September, the squadron deployed to Okehampton in Devon for 2 weeks and undertook various elements of training. This training included a technical exercise, infantry exercise, live firing on the ranges and also adventurous training. 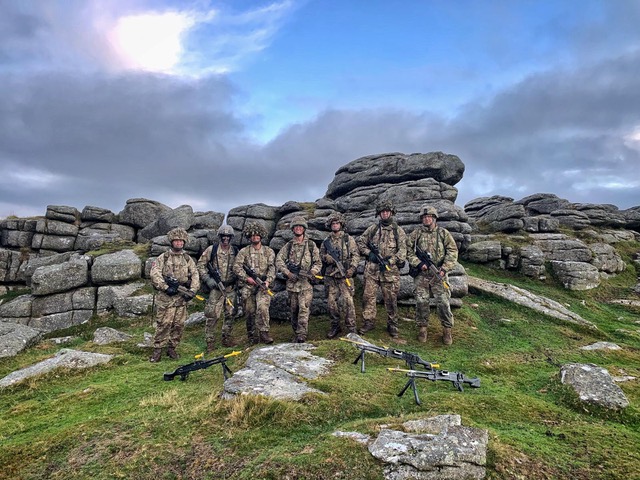 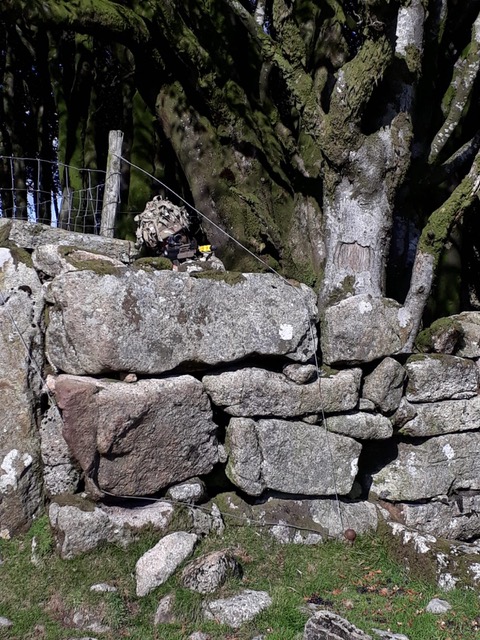 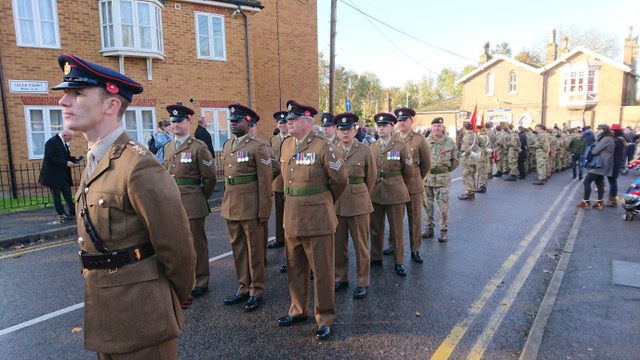 January
In January the squadron deployed on a Technical Exercise to test the squadron’s main role of Bulk Replication. This was a challenging exercise with live mapping tasks to complete. 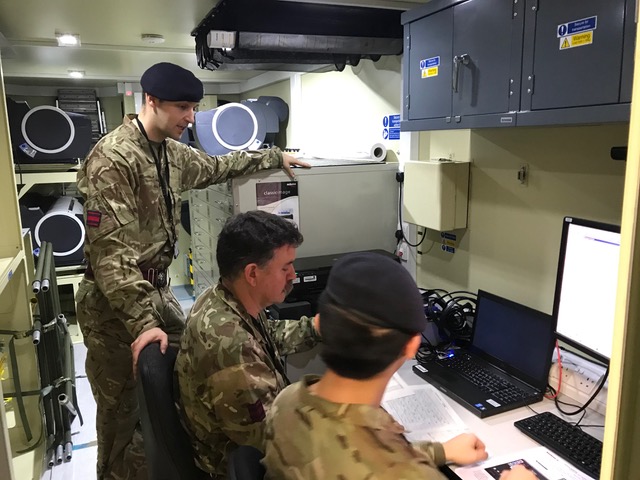 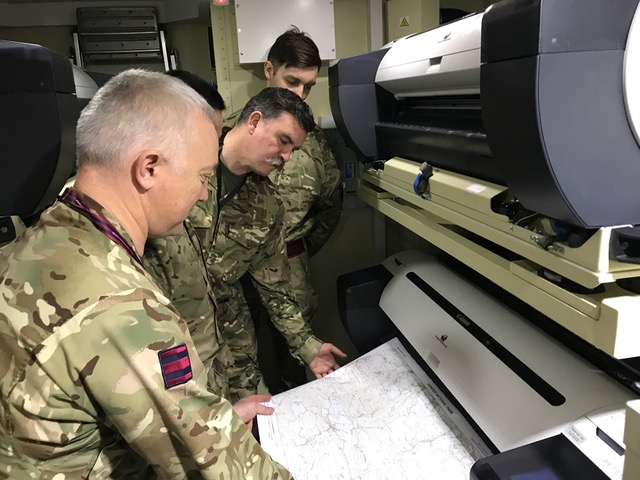 February
In February, the squadron held one of it’s Military Annual Training Test weekends to ensure all the troops in the squadron were classed as efficient. The Squadron also held two technical courses. The Geographic Technician Intermediate is the initial trade course that qualifies soldiers as Geographic Technicians. The second course was a Positioning Survey course which gave the attendees a specialist geographic qualification. 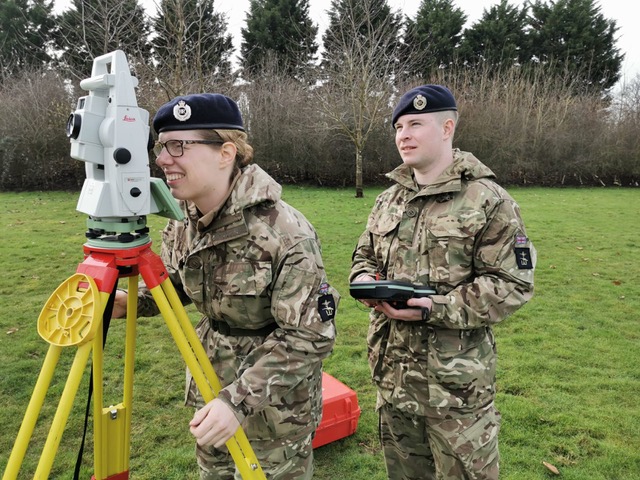 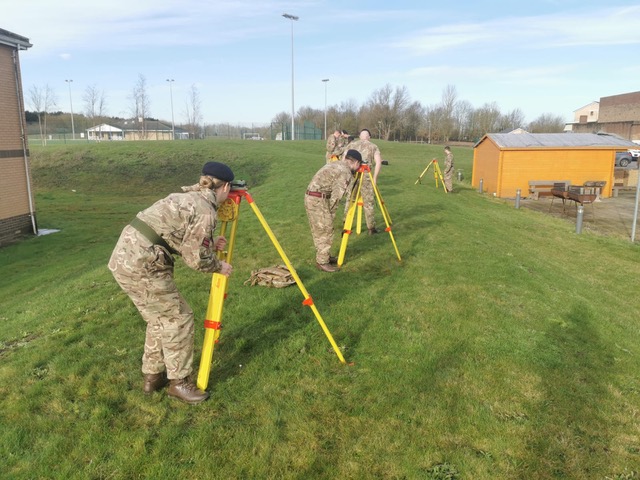 March to April
All soldiers in the squadron are required to be qualified as military drivers. This March weekend ensured our soldiers are up to date on the various military and civilian vehicles the squadron holds. In April a ranges weekend will be held. This is an important opportunity for soldiers to test improve their marksmanship skills.

Endeavour dinner – May
Promoting excellence is always rewarding and this award provides the Worshipful Company and the Squadron the opportunity to jointly congratulate an outstanding member of the Squadron. The dinner itself is an alumni event and so allows those that have previously served with the Squadron to catch up with their old friends and to make new ones. The dinner is usually a huge success and we look forward to welcoming the Master to the Remembrance weekend for the announcement of the new Endeavour Award winner.

Driving Training weekend – June
All soldiers in the squadron are required to be qualified as military drivers. This weekend ensured our soldiers were up to date on the various military and civilian vehicles the squadron holds.

Combat Engineer Training – July
In July the squadron will hold a week of combat engineer training. All soldiers in the squadron are Combat Engineers and this weekend is an important and enjoyable opportunity to brush up on these skills. Soldiers will also get the chance to partake in some adventurous training.

Battlefield study – September
This year the squadron will be visiting Sicily to study the Allied Invasion of Sicily in 1945 – Operation Husky. This study is still in the early planning stages but will prove to be a thought provoking and informative trip.

Soldier First Syllabus – September
In September the squadron will conduct an infantry training exercise. This is part of the wider Army’s soldier First directive which ensures soldiers are up to date on their basic infantry skills. The exercise will include arduous training in the field, using blank ammunition and pyrotechnics to make the training as realistic as possible. 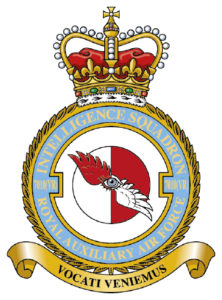 Three members of the Sqn are currently mobilised in support of Op SHADER (the UK contribution against so-called Islamic State) which is an enduring commitment.

Three more are mobilised in support of Op RESCRIPT (the UK Defence contribution to civil authority support requirements during the Coronavirus pandemic).

14 members of the Sqn have offered their availability to answer any further mobilisation requests for Op RESCRIPT. 22 others are in Key Worker categories.

The Sqn’s April and May working weekends were held as “virtual weekends” with all attending personnel working from home on skills maintenance tasks, exploiting the connectivity provided by a MOD version of MS Teams. Sqn members have also been using the lockdown opportunity to concentrate on professional military development through a range of online courses available to them via the Defence Learning Environment.

When the Sqn returns to normal activities at RAF Wyton is of course dependent on when and how Coronavirus restrictions are lifted.

Our extra-curricular activities have been curtailed by COVID-19 but I anticipate they will pick up again in the future.

Please pass on my very best wishes to all members of the Worship Company and their families during these challenging times. The support of those members who employ reserves is greatly appreciated even more at present and I hope a positive business environment returns quickly for all.