Mobilization and Operational Output. The mobilization of 7010 Sqn personnel into Royal Air Force service continued during the period, with Sqn members mobilized and manning ImInt posts, both in UK and overseas, as part of Operation SHADER. Manning of these posts is a top priority for the Squadron. Operational output has also continued from the monthly training weekends at both of the Sqn’s Continuous Training Locations.

Exercises. A 7010 Sqn member participated in the prestigious Exercise RED FLAG, held at Nellis AFB, Nevada during February 2016. The exercise included US units along with RAF and RAAF participants. RAF squadrons involved in RED FLAG 16-1 were 3 Sqn from RAF Conningsby, with TYPHOON, 5 Sqn (SENTINEL) and 8 Sqn (SENTRY) from RAF Waddington, and 47 Sqn (HERCULES) from RAF Brize Norton.

UK/US Exchange 2016. A SSgt from the Ohio Air National Guard arrived in the UK in early-June for the inbound leg of the annual UK/US reserve imagery analyst exchange. He will undertake a varied itinerary, visiting several ISR-related facilities. The 7010 participant will travel to the US later this year. Both are pictured, below, outside 10 Downing Street. 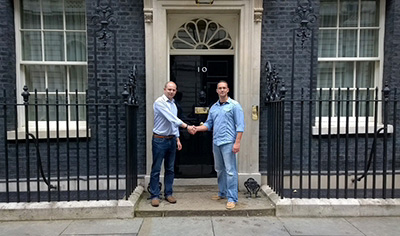 Such training allows imagery analysts to keep their kit recognition skills at the highest level: 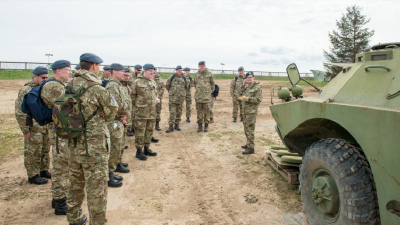 Adventurous Training. During May 2016, a group of Sqn personnel participated in a gliding session, held at RAF Cranwell: 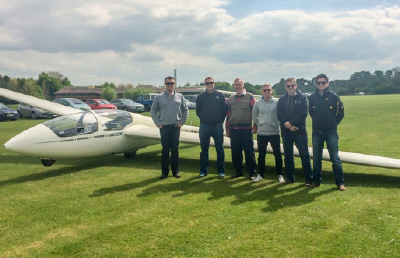 And finally, OC 7010 will lead a team of five Sqn personnel to Creil AFB (just north of Paris) to participate in a French-led NATO recognition competition, to be held on 20-22 June 2016. The team members have been revising conscientiously, and a report on their efforts will appear in the Q3 bulletin.

Following HMS ECHO’s success in her fishery protection role, the ship has since returned to her core role and is once again out surveying in and around UK waters.

Prior to resuming our survey operations, we were delighted to host our affiliates and families on two separate sea days. This proved to be enjoyable for all and provided our guests with an opportunity to see what HMS ECHO does and how versatile the ship and her company are. It was also a fabulous opportunity to thank all of those who continue to support us in our endeavours. During the affiliates’ day, Petty Officer Gemma Oldroyd was presented with the WCCS Endeavour Award by Lady Davies for her hard work and diligence over the past year.

Mobilisation and operational output
135 Sqn have a number of roles:

Point Positioning. 135 personnel are currently leading an airfield survey in conjunction with the Canadian Armed Forces in Quebec. The survey task not only ensures flight safety but enables interoperability between nations.

Geospatial Analysis. The Sqn has provided individual reinforcements to support the wider UK and NATO Defence requirements. We continue to have personnel on short notice to move in support of the Foreign & Commonwealth Office in case of a crisis situation.

Training
The Sqn has continued to hone its GID skills recently practicing deploying the mobile Geo capability into the field and will soon be undertaking a technical confirmation exercise in an urban environment.
This year has been designated a training camp year, so many personnel have been undertaking technical geospatial and military leadership training courses.
Two personnel recently embarked on the Survey vessel HMS Scott, with whom 42 Regt have affiliation, for a familiarisation visit at sea.
Adventure training and sporting activities have ranged from judo in Cyprus to delivering mountaineering training to wider Defence across Europe and further afield.
The main Sqn Adventure training focus has been on a Sqn kayaking expedition along the 200 kilometre Rideau Canal between Ottawa and Kingston Ontario, Canada. The canal was surveyed and built by the Royal Engineers and is formed of a series of canal sections linking large lakes. A mixed group of Sqn and Canadian military surveyors travelled its length as part of the Corps 300 celebrations, and were warmly welcomed into local historical celebrations as well.

Other activities
Recently the Sqn visited the Royal Geographical Society. The Sqn already contains a number of Chartered Geographers and Fellows and we hope to develop a closer professional relationship in the future.

In May Major Charlie Wasilewski passed over the role of Sqn OC to Major Neal Archer after a very successful 18 months in post during which he implemented the Geovocational Specialist and successfully improved recruiting.

Two personnel recently embarked on the Royal Navy survey vessel HMS Scott, with whom 42 Rent have an affiliation, for a familiarisation visit at sea.