On duty in the Mediterranean since Nov 2016, ECHO has been busy serving as the UK contribution to Operation SOPHIA – the EU naval operation aimed at countering the illegal migration issue – and undertaking surveying and data gathering work in support of operations. Briefly returning home for two months this summer, ECHO entered dry dock for her 5 yearly docking (think MOT for ships), after a rare opportunity to embark families and affiliates at sea. During the docking almost every system was examined and maintained to make sure that ECHO is fit and prepared for her next 5 years’ service.

A short trials period followed before ECHO sailed into Plymouth to spend some rare time in her homeport while preparing for her next 2 years away from the UK. Departing the UK into the early Autumn storms late October, the Ship’s Company had to find their sea legs quickly on a fairly vicious transit across the Bay of Biscay. On the way into the Mediterranean ECHO stopped briefly in Gibraltar. Always a popular visit, ‘Gib’ gives sailors and marines the opportunity to be attacked by the famous Barbary Apes while doing the traditional ‘Rock Run’, a gruelling 2.7 mile race that climbs 1300 feet from the Dockyard to the top of the Rock.

This visit was especially well timed for the 10 man Royal Marine Force Protection Team who celebrated the Corps’ 353rd birthday whilst alongside the place that gave them their greatest battle honour. Sailing from Gibraltar at the end of October, ECHO conducted operational sea training as she sailed East – enduring a series of fires, floods, attacks and other challenges (thankfully all simulated!) before arriving in Sardina early November and rejoining the European Union Naval Force Mediterranean, and Operation Sophia for a second tour of duty.

Just 10 weeks after returning to the UK – ECHO is back out on operations, where she will remain until late 2019. Throughout this period, as well as working to counter illegal migration in the Mediterranean, she will undertake Defence Engagement work in support of the United Kingdom’s interests and conduct her core role of Military Data Gathering to inform current and future operations.

135 Sqn have a number of roles: Geospatial Information Dissemination (GID), survey, geospatial analysis and in the future bulk reproduction of mapping. The Sqn continues to provide geo support to the Army, Defence and wider Government. The Sqn has a constant remit to provide geo support when required to the following customers-
• Allied Rapid Reaction Corps (ARRC), in support of NATO, ARRC is the force that provides the NATO Reaction Force at high readiness for NATO in 2017, and at a lower readiness for 2018.
• VANGUARD – support to a UK Divisional deployment
• Wider Defence

As we near the end of the year I will explain a number of the activities that individual augmentees from the Squadron have conducted over the year, but we have not reported so far:
• Individual augmentees have supported operations within Intelligence (both UK and NATO) providing image processing capability and reach back support and continue to support elements of the Special Forces.
• The Sqn has twice been called upon to train Regular Army personnel deploying in support of the UK’s forward presence in Estonia.
• Our new Geo Vocational Specialists, Reserves who are recruited purely for their civilian Geo skills have been in action in advisory roles. Advice has included evaluating how UK Disaster Response support can be improved, analysis of NATO Geo processing and script writing to support processes and auto production of products from data.
• Recently 2 personnel have evaluated, restocked and created a map control system for the Map Depot of British Forces Cyprus.

Shortly we will be hosting the LONDIST District Reinforcement Team at RAF Wyton, within which there are a number of WCCS members, providing briefings on the Sqn and our wider Regiments capability.
135 Sqn hold the niche capability of GID within the British Army and to a great extent across NATO.

We are currently preparing new personnel to take up the mantle of support to both ARRC and VANGUARD for 2018. This will involve our personnel being integrated within the wider Regiment’s step up training, to ensure interoperability between Reserves and Regulars both in terms of personnel and technical equipment culminating in the multi national EX ARRCADE GLOBE in the summer. We are also looking to increase our Geo Analaysis support to both the Regiment and wider defence.

Last weekend was a busy weekend as the Sqn supported the Royal British Legion’s Festival of Remembrance at the Albert Hall, the Lord Mayors Show in London as well as the annual but important Remembrance Parades for Epsom & Ewell and Worcester Park.

Photos of the Sqn on the Lord Mayors Parade are below.
The Sqn appreciates the close bond between the WCCS and the Sqn, and was delighted to host the WCCS Master and Military Representative at our Remembrance weekend, where the Master honoured the achievement of Cpl Kirchmair by presenting the Endeavour award. 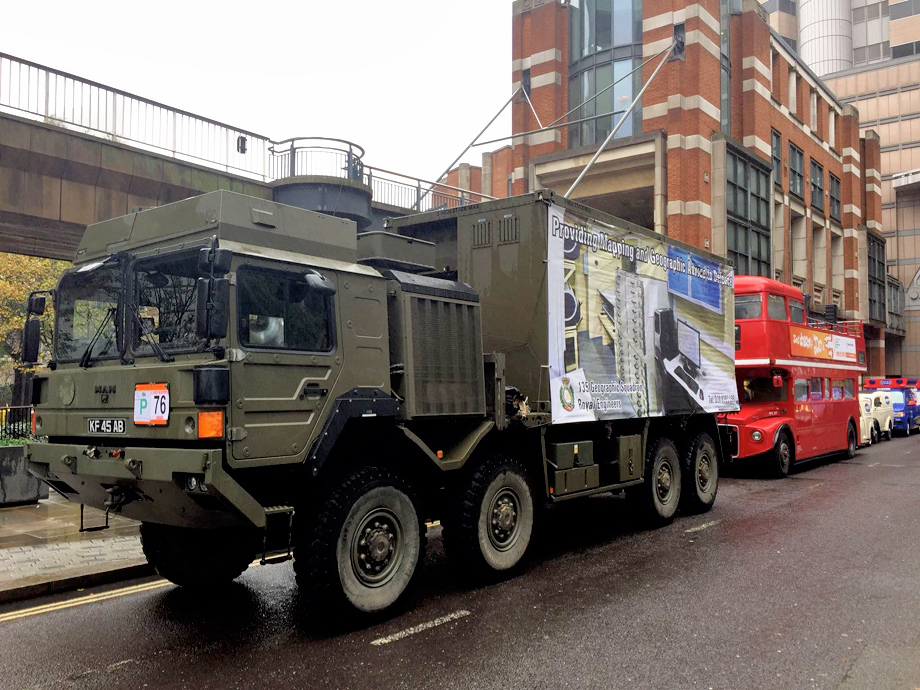 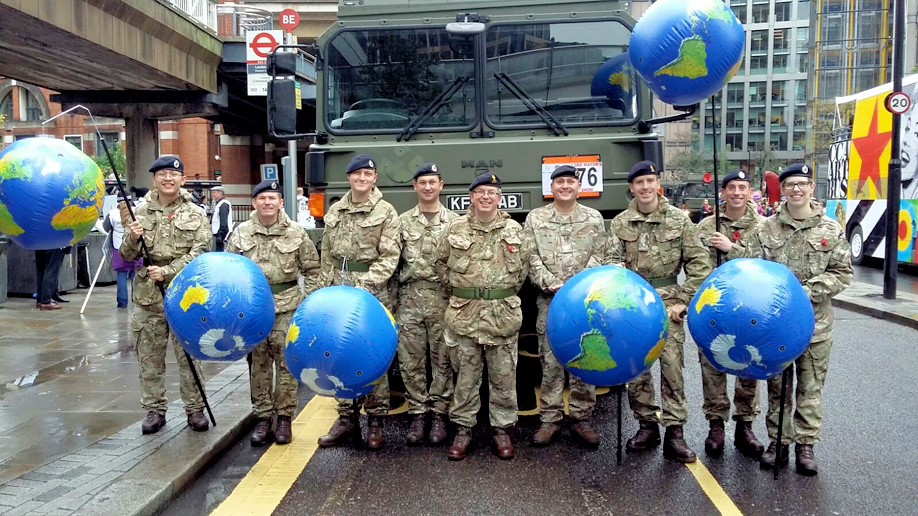 Five members of the Sqn are mobilised for full-time service with the RAF in support of Op SHADER
in the UK or overseas. The majority will serve a 6-month period before returning to civilian careers.

The Sqn’s primary focus is to provide real support to Operations by augmenting Regular RAF teams at RAF Wyton. We are carrying out a feasibility study to determine if we can move to supporting one of our tasks at RAF Wyton for two weekends per month. If agreed, this new method of working will begin in January 2018.

The Sqn continues with its recruitment drive alongside its sister sqns and is currently researching the feasibility of holding Recruitment Information days at RAF Wyton, which is now the main centre of operations for the Sqn. Recruitment figures remain positive and allows overall manning to remain at least constant.

Both 7010 and 7006 Sqn personnel attended a Project HIGHGATE conference at RAF Wyton in Oct 17. Project HIGHGATE is a long term programme to ensure that the RAF Int Reserves are aligned with future working and training requirements. The Sqn will develop a broader remit to provide ISR (Intelligence, Surveillance and Reconnaissance) support in the medium term.

Two Sqn members graduated from the Operational Air Intelligence Course (Reserves) (OPAIC (R)) in Oct 17. One of whom was awarded the “Top Student” award for his performance throughout the 12 month course programme. An excellent result for 7010 Sqn given that this is the first OPAIC (R) to receive 7010 Sqn students. Seven Sqn members began another iteration of OPAIC (R) on 2 Nov 17.

Three Sqn members graduated from the Reserve Forces Imagery Analysis Course (RFIAC) in Oct 17 too. These are likely to be the last newly-qualified Imagery Analysts we will receive for at least 12 months because the course is being reviewed and updated. This should not however have a significant impact on our overall ability to deliver on our tasks.

Our current Honorary Air Commodore (HAC), Delva Patman, will move to a new RAF Reserve role in due course although we still await confirmation of who her successor will be.

Nine members of the Sqn attended the Reserves Air Combat Power Visit (ACPV) at RAF Coningsby on 22 Oct 17. ACPV is an annual event, during which the RAF showcases its aircraft and its full range of capabilities to the Royal Navy, Army and key civilian partners. An excellent opportunity for Sqn personnel to get close to some of the platforms we support at weekends.

• The Sqn Adjt attended the 7010 Sqn Dining Club dinner at the RAF Club on 28 Oct; the Dining Club’s President (Air Marshal Sturley) and the HAC were in attendance. The Adjt provided the Dining Club members with an update on Sqn activity.