Following a busy summer and a handover of Commanding Officer, HMS ECHO has returned to sea. The new Commanding Officer, Commander Andrew Norgate assumed Command at the end of the summer and after completing engineering sea trials and survey tasking off of the UK coast, ECHO is currently undergoing a period of operational sea training delivered by the Royal Navy’s merciless, sadistic, but very professional training wing known as FOST (Flag Officer Sea Training). After what will amount to a month plus of (thankfully simulated!) burning, flooding, bombing, and fighting training – ECHO and her ship’s company will be fully trained for mission and ready to deploy on operations overseas. On departure from the UK in late Autumn, ECHO will commence a year long period of military data gathering and survey operations in the Mediterranean. 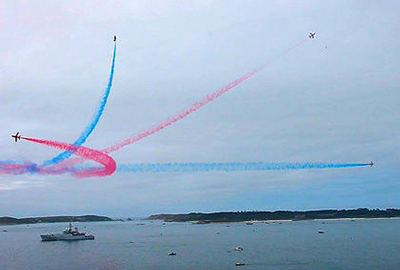 The Red Arrows as HMS ECHO’s backdrop while departingfrom St. Mary’s in the Isles of Scilly 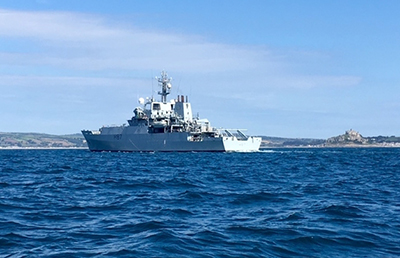 Mobilisation and operational output
135 Sqn have a number of roles: Geospatial Information Dissemination (GID), survey, geospatial analysis and in the future bulk reproduction of mapping.
The Sqn continues to provide geo support to the Army, Defence and wider Government.
The Sqn has a constant remit to provide geo support when required to the following customers:
Foreign and Commonwealth Office, and has 2 personnel on call at 5 days notice to support crisis response activities,
Allied Rapid Reaction Corps (ARRC), in support of NATO, ARRC is the force that will provide the NATO Reaction Force for NATO in 2017.
Additionally we have supported Special Forces, Defence Intelligence Fusion Centre, NATO Defence Intelligence Fusion Centre, 1 Div, and wider Intelligence to name but a few.

Training
This year has been designated a training year with all personnel concentrating on attending technical, command and leadership courses as required for career development and promotion.
The Sqn has recently conducted a technical confirmation exercise in an urban environment, and delivered a formal 2 week technical trade training course.
This year has been designated a training camp year, so many personnel have been undertaking technical geospatial and military leadership training courses.
Adventure training and sporting activities have ranged from mountain biking, golf and orienteering – all at Corps level to delivering mountaineering training to wider Defence across Europe and as we speak South Africa.
The imminent Sqn training focus is our annual camp near Weymouth, which will be a combination of driver and fork lift training, coupled to a military phase which will include competitive shooting and escape and evasion.
The look forward encompasses further surveying technical training and a Battlefield Study to Gettysburg in the USA. The Gettysburg study will evaluate lessons that should have been learnt from the Civil War, an industrialised war, and applied in the First World War. It will include terrain studies coupled to the battles, review of the role of mapping in the campaign, culminating in a bespoke visit to the Library of Congress to view and handle original mapping from the period.

Mobilization and Operational Output
The mobilization of 7010 Sqn personnel into Royal Air Force service continued during the period, with Sqn members mobilized and manning ImInt posts, both in UK and overseas, as part of Operation SHADER. Manning of these posts remains a top priority for the Squadron. Operational output has also continued from the monthly training weekends at both of the Sqn’s Continuous Training Locations.

Training
A group of six 7010 personnel are currently participating in RFIAC 1/16, which is scheduled to finish in October 2016. The RFIAC course provides the fundamental trade training for reserve imagery analysts. Another group of five 7010 personnel will commence RFIAC 2/16 next week.

UK/US Exchange 2016 – Return Visit
The 7010 participant in the UK/US exchange travelled to the US during July, where he was hosted by his Ohio Air National Guard exchange partner. 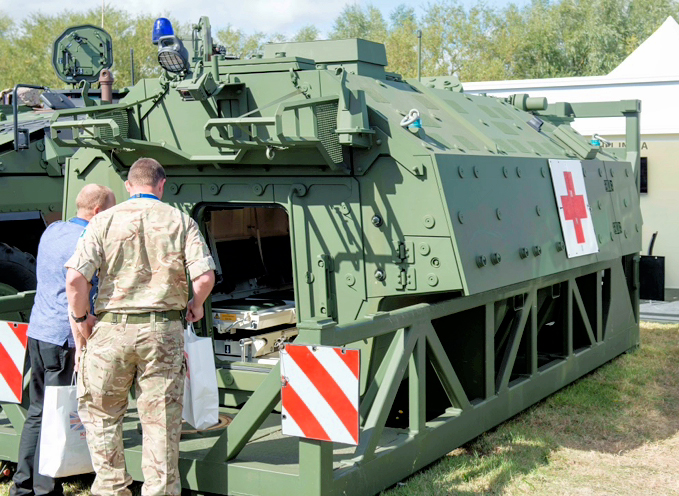 Recruiting
The Sqn uses the summer airshow season to set up its recruitment stand to raise awareness of 7010 Sqn’s work to potential recruits. Three Sqn personnel had a productive time deploying with 1 ISR Wg to the Royal International Ait Tattoo (RIAT) during July. As expected they were the first Sqn personnel to see the RAF’s F-35B Lightning II. However, OC 7010 Sqn managed to get a little closer to the new aircraft at the Farnborough Airshow (see photo): NATO Recognition Competition
A 7010 team participated in the 2016 French National “Tournament” on material identification at Creil AB110 on 21 Jun 16, and were placed a very commendable 4th out of 36 teams. The team members testified that the competition was extremely challenging but are keen to improve their ship recognition skills for next year. The afternoon was spent going around a geospatial exhibition where the French Defence minister, Jean-Yves Le Drian, spoke, followed by National Geospatial Intelligence Agency (NGA) director Robert Cardillo. The image below is of the 7010 team in front of a French Air Force Rafale C.: 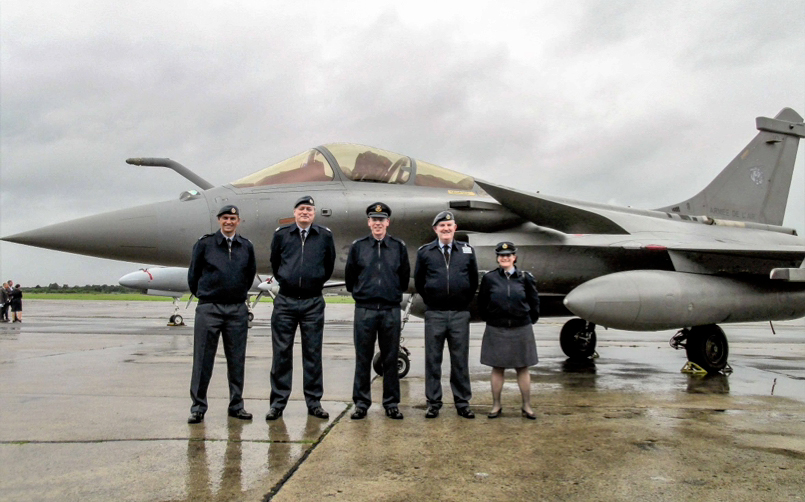