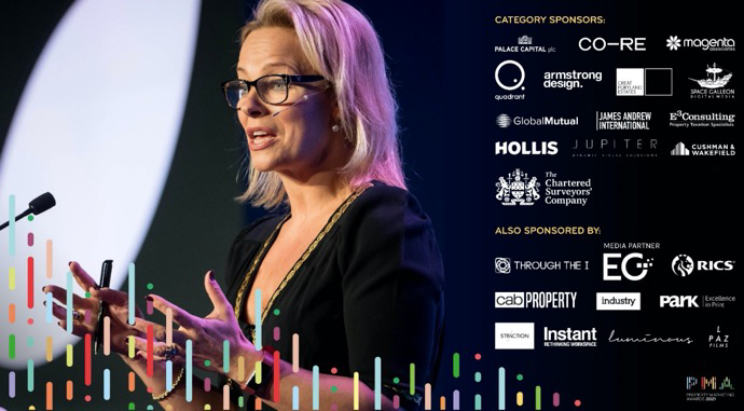 On the evening of Thursday 24 June 2021 the Property Marketing Awards (PMA) held their first LIVE virtual awards ceremony in 29 years.

The ceremony was superbly hosted by broadcaster Daisy McAndrew, and included several other new features introduced on account of the pandemic.

As it had not been possible to hold PMA 2020, there were two years of creative work eligible for consideration by the PMA judges. In fact, they had a record number of entries to assess, in a series of virtual meetings ably organised by PMA Jury Chair, Misa Von Tunzelman. The result was a longer than usual shortlist.

Competition was intense for the 15 award categories, six of which were new to reflect the changes in the market and in technology. Not only were there 16 winners on the night (1 category had joint winners ), but also 10 Highly Commended entries.

A key ingredient of any PMA evening is the networking. This year, virtual networking was managed via a series of breakout rooms, hosted by PMA sponsors, with attendees able to move between rooms after the main ceremony. The success of these was enhanced by both Daisy and the Master dropping in for informal chats – just as in traditional networking!

As the Master had said before presenting the Grand Prix, I had inherited a well-established PMA formula from my predecessor, Colin Peacock. However, Covid-19 meant we had to tear this up and start completely from scratch.

Fortunately, while we researched how to stage a virtual ceremony, and which production company to use, we were able to regularly publicise PMA 2021 through another innovation. This was the ‘Fit for the Future’ series of marketing webinars, seven in all, run in association with marketing consultancy, Straction.

The topics chosen reflected the challenges being experienced as we all navigated our way through the various stages of lockdown. It was reassuring to listen to the panels of industry experts as they gave their largely optimistic views. Dr Judith Mohring in particular shared some life ‘hacks’ to help make home working during the winter healthier, happier and more productive.

TTI, the production company we worked with, also produced the excellent video shown at the start of the ceremony, in which Rebecca Lovelace, the Co-Founder of our nominated beneficiary, Building People, eloquently described her work.

There had been times during the most restricted months of lockdown when we wondered if it would be possible to hold PMA 2021 at all – let alone produce a meaningful surplus to donate to Building People. Fortunately, we were able to achieve both goals, because of three factors:

I would particularly like to say a massive thank you to all the PMA Sponsors – 26 in total – who stayed with us and consistently supported us while we worked on the art of the possible. Your generosity and help provided the bedrock of our revenue.

Similarly, I would like to thank our many entrants, some old PMA hands but others who we only met this year, for their wonderful contributions, and whose attendance on the night exceeded our expectations. From the many messages and emails received after 24 June, it seems you enjoyed the party, which is just what we wanted to hear.

Lastly, a sincere thank you to the Master, the Court, the Clerks and all Liverymen for ‘being there’ throughout.

And so the Property Marketing Awards end this highly eventful two year period re-invigorated and in good heart, confident of our place in the awards market and equipped with many new skills and ideas. We eagerly look forward to implementing these in 2022.